Beetles (or ladybugs, if you prefer) are a mixed bag. On the one hand, they’re pretty straightforward, but on the other hand, they can really get in the way.

Beetles, like ice, require three hits to clear. The number of spots on each beetle’s shell tells you how many hits remain before it clears, and when only one hit remains the beetle will shiver. Also, if you touch and drag diagonally away from the beetle, you’ll see what color will appear next — because each hit on a beetle also changes its color.

Beetles are also like fire and slime in that, if you don’t match with them on a turn, they’ll move in whatever direction they’re currently facing. If a beetle hits a wall or another beetle, it’ll turn, but otherwise it will just swap with whatever’s in front of it, whether it’s an anchor, ball, wild, or just a plain old dot.

When you clear a beetle, it lays a bomb and flies away. That’s helpful — usually. 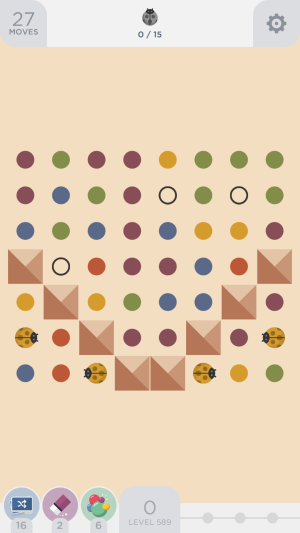 Level 589: you start with four beetles, all of whom have three spots on their shells.

Level 589: I hit one of the beetles and it turned purple. It also now has only two spots.

Level 589: I hit the purple beetle and it turned blue. It now only has one spot on its back.

Level 589: it was a royal pain in the ass, but I managed to capture what it looks like when a beetle flies away. Note the bomb that it laid in the lower-right corner.

Because beetles can take hits from pretty much anything, it’s usually safe to attack other goals — especially anchors. However, as with anchors, magnets, and clouds, you’ll sometimes not get enough beetles to meet your beetle goal after handling everything else. Keep your eye on the top of the screen while you go. 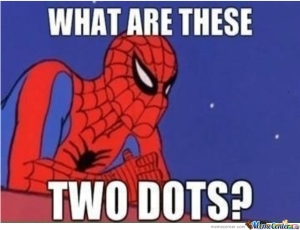 If this guide helped you out, please consider buying one of my stories from Amazon. Here’s one: Return to Waypoint 5, published in Black Denim Lit, is about a spice trader who has to, yes, return to space station Waypoint 5 to rescue the daughter he never knew he had.