Slime: Two Dots’s answer to the question “what could possibly be more annoying than fire?” Well, how about something that’s like fire, but instead of destroying the dot (or obstacle) it touches when it replicates (in the same way that fire does), it instead encases it in slime that takes two hits to destroy.

Slime can be destroyed in all the same ways as fire, but it’s more insidious because it takes two hits, and because when it replicates itself that’s another two hits. Worse, slime doesn’t fall when you clear spaces underneath it, and it can expand into empty spaces where dots don’t exist (such as when a block is above them, preventing them from dropping down).

Slime is the worst.

Oh, and by the way, nothing can destroy slime in one hit — not a bomb, not a gem, not a lotus, not a cloud. And there are many levels where you have to deal with lots of small slime outbreaks, all of them expanding with every move you make unless you match something inside (not beside, but actually inside) the slime.

By the way: blocks, ice, and water can all hold back slime, but fire can spread inside of slime in a completely different direction than the slime is moving. Like I said: the worst. 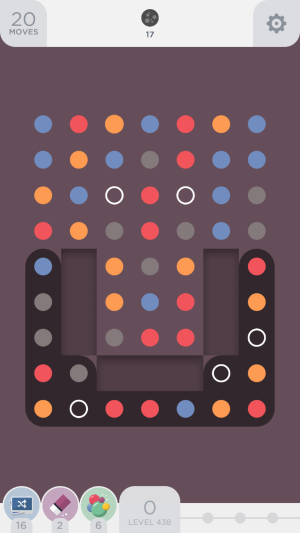 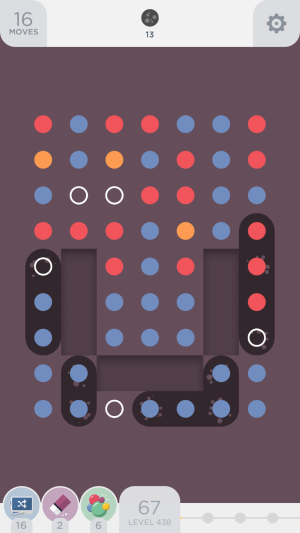 Level 438: in four moves, I’ve managed to create four separate instances of slime. Note the bottom-left slime; it has gray dots in it, indicating that it’s already been hit once. 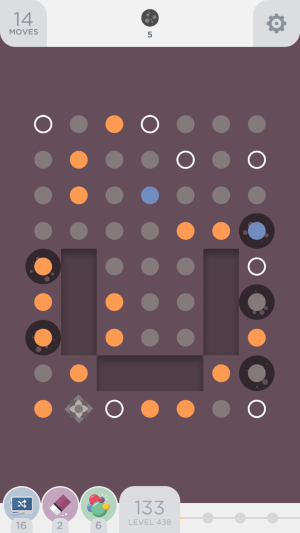 Level 438: luckily, I’ve cleared out most of the slime. But I now have only 14 moves to go, and there are five separate slime areas, all of which can expand and create new slime.

First of all, accept the fact that you’re going to use a lot of lives, especially on the levels where there are very narrow spaces and a lot of slime. Then eliminate the slime as quickly as possible. Be generous with your use of booster boxes and power-ups; you’ll need them. And don’t get too pissed off when you think you’re done with the slime and the game gives you a random level that has some, just for funsies.

If this guide helped you out, please consider buying one of my books from Amazon. Here’s one: Memories of My Father, the story of a girl who grows up to become a time-traveling neurosurgeon, all to figure out why her dad’s memories are being destroyed. But when she discovers the horrible truth, the only possible way to save him may be to forget everything she knows.