SIX OF THE BEST… things The Orville did better than Star Trek: Discovery

I really wanted to like Star Trek: Discovery, but CBS and Paramount are making it really hard. Meanwhile, The Orville is fun, funny, and hopeful. It’s much better than Discovery. Here’s why. 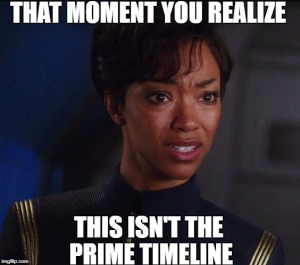 Josh Roseman (not the trombonist; the other one) has been published in -- among others -- Asimov's, Escape Pod, and Evil Girlfriend Media. In 2015, he released his first collection, The Clockwork Russian and Other Stories, and followed it up with 2016's Memories of My Father. When not writing, he mostly complains that he's not writing. Find him online at roseplusman.com, or on Twitter @listener42.
View all posts by Josh Roseman →
This entry was posted in column, nerdery public, nonfiction, six of the best, writing and tagged abramsverse, all access, bryan fuller, canon, cbs, dick jokes, discovery, executive producer, fox, greek chorus, humor, jason isaacs, klingons, prime universe, seth macfarlane, sonequa martin-green, star trek, star trek discovery, super serious, the orville. Bookmark the permalink.