SIX OF THE BEST… Haven troubles

The “troubles” are supernatural afflictions affecting the townspeople of Haven, Maine, on a show called Haven that originally aired on SyFy. The show is now on Netflix, and I figured I should finish watching it after only making it through two seasons during first-run. So I did, and then I made a list of the troubles. Well, some of them. Six, to be exact. 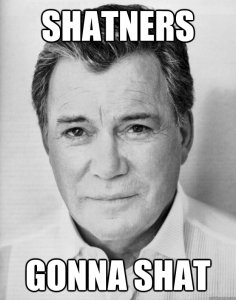 And yes, there’s a reason I put Shatner in this post.

Josh Roseman (not the trombonist; the other one) has been published in -- among others -- Asimov's, Escape Pod, and Evil Girlfriend Media. He's published two short-story collections, THE CLOCKWORK RUSSIAN and BOSS FIGHT, as well as a novel, AFTER THE APOCALYPSE. When not writing, he mostly complains that he's not writing. Find him online at roseplusman.com, or on Twitter @listener42.
View all posts by Josh Roseman →
This entry was posted in column, nerdery public, nonfiction, six of the best, writing and tagged haven, john dunsworth, MacGuffin, melt with you, pain, paranormal, resurrection, scenery chewing, stop the world, supernatural, trouble of the week, troubles, william shatner. Bookmark the permalink.