So yeah. The Oscars are this weekend. And only one film came out before October 25th of last year. Ridiculous. Let’s look at six other films that could have been considered. 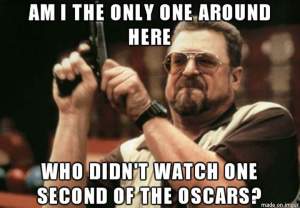 Josh Roseman (not the trombonist; the other one) has been published in -- among others -- Asimov's, Escape Pod, and Evil Girlfriend Media. In 2015, he released his first collection, The Clockwork Russian and Other Stories, and followed it up with 2016's Memories of My Father. When not writing, he mostly complains that he's not writing. Find him online at roseplusman.com, or on Twitter @listener42.
View all posts by Josh Roseman →
This entry was posted in column, nerdery public, nonfiction, six of the best, writing and tagged 10 cloverfield lane, academy award, best picture, captain america civil war, deadpool, educate and entertain, hidden figures, kubo and the two strings, me before you, million dollar baby, million dollar bullshit, Oscar, zootopia. Bookmark the permalink.