The actual title of the column is a bit longer. It’s about narrative devices that have become so cliche that you really can’t use them in your writing anymore. Which is frustrating. 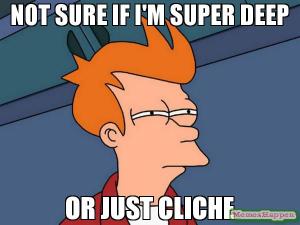 Josh Roseman (not the trombonist; the other one) has been published in -- among others -- Asimov's, Escape Pod, and Evil Girlfriend Media. In 2015, he released his first collection, The Clockwork Russian and Other Stories, and followed it up with 2016's Memories of My Father. When not writing, he mostly complains that he's not writing. Find him online at roseplusman.com, or on Twitter @listener42.
View all posts by Josh Roseman →
This entry was posted in column, nerdery public, nonfiction, six of the best, writing and tagged alias, buffy, chekhov's gun, cliche, cozy catastrophe, family drama, firefly, game of thrones, i am your father, idiot plot, it was all a dream, iZombie, little detail, narrative device, oh you like that character, pop-culture reference, sherlock holmes, spoiler alert, squid in the mouth, supernatural, the oa, turkey city lexicon, white room syndrome. Bookmark the permalink.